Can we improve nitrogen use efficiency in cane?

Improving the efficiency of nitrogen fertiliser in sugar cane is a challenging task. Growers must fertilise today to ensure maximum crop yields 12 months later, knowing little about what the weather will do to help or hinder the uptake of the fertiliser.

Growers must fertilise today to ensure maximum crop yields 12 months later, knowing little about what the weather will do to help or hinder the uptake of the fertiliser.

Nitrogen efficiency is therefore a critical issue, and what the ‘less than certain’ weather delivers in terms of rainfall reliability – too much or too little – is fundamental to the outcome.

Understanding the behaviour of nitrogen in the soil and the potential ways it can be lost before it is taken up by the crop, can give growers and agronomists a better chance of improving nitrogen efficiency and consistently achieving higher yields.

To successfully improve nitrogen use efficiency, cane growers must protect against each of the major loss pathways (volatilisation, denitrification, leaching and runoff), all at the same time. 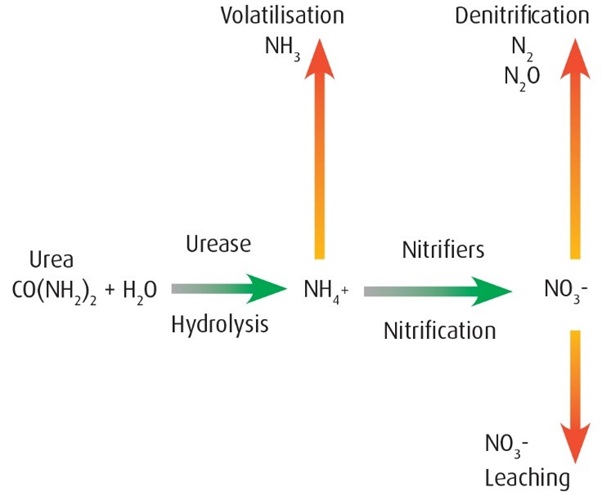 Volatilisation is simply the process of forming a gas (a phase change) from either a solid or liquid.

In the case of urea in sugar cane, nitrogen is lost as ammonia gas (NH3) and is largely unrecoverable by the crop. Volatilisation is favoured by alkaline soil conditions. From a pH perspective, the volatilisation process is favoured when the localised pH exceeds 7, but more particularly when it is 8 or greater. Applying urea can increase the pH of the soil around the band.

Whenever urea is surface applied onto bare soil or trash it can be subject to volatilisation.  The longer it is inadequately incorporated (by means of mechanical, irrigation or rainfall incorporation) the longer is it prone to losses and also the greater the amount of nitrogen that can be lost.

When urea is effectively incorporated into the soil it is not subject to volatilisation loss, as long as it is sufficiently covered by at least 10 cm of compacted soil. The critical measure is not just depth, but ‘depth of the compacted soil cover’.

A real watch out is under certain seasonal and crop production conditions, such as in very moist clay or dry, heavily compacted soils, an emerged crop with 30 cm height or greater, or in green cane trash blankets, where it is extremely difficult to get fertiliser furrow closure and achieve 10 cm of compacted soil cover.

Any situation with an open furrow of urea fertiliser could leave it exposed to potential losses. The use of finger press wheels or similar provides the most consistent and best mechanism to achieve compacted soil cover. 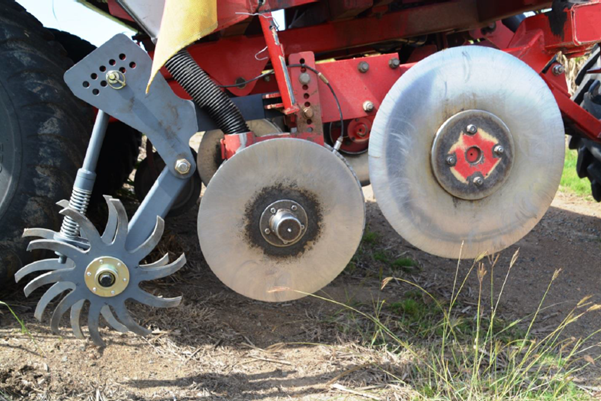 Use press wheels to achieve 10 cm of compacted soil cover.

A soil slot without (left) and with (right) press wheel mechanical incorporation. In the situation on the left where the 20 cent piece is visible, the fertiliser might be thought to be ‘buried’ but in reality is still surface applied and at risk from volatilisation loss.

When urea is exposed to moisture, it converts to ammonium in the presence of a naturally occurring enzyme called urease. Moisture may be a light shower, dews or even condensed moisture from the soil – that is enough to start the conversion process.

The resulting ammonium, under alkaline conditions, forms volatile ammonia which can be easily lost. This is because of a characteristic of ammonia gas, which has a boiling point of -33.4oC. The ammonia is actually lost as the moisture evaporates from the soil and/or trash.

Product selection is also an important factor that can also help reduce volatilisation losses in situations where the fertiliser cannot be effectively incorporated into the soil.

Fertilisers with nitrogen in the ammonium form, and without localised alkaline reactions, are significantly less prone to volatilisation losses than urea. Such nitrogen fertiliser products include Cal-Gran®, GranAm® and EASY N®.

Denitrification can occur whenever nitrate nitrogen is present in the soil and the soil’s pore spaces fill with water. Nitrate can be derived from multiple sources, other than applied fertiliser, like fallow rotation crops and soil organic matter mineralising.

Under limited oxygen conditions, soil microbes can use nitrate as an oxygen source resulting in the release of nitrous oxide gas initially, and then di-nitrogen gas.

Denitrification events can occur whenever the conditions are right and this is often multiple times in one season in cane systems.

Losses can occur due to prolonged wet weather, a single major rain event, or even unexpected rainfall after irrigation. Denitrification losses can occur even with small rainfall events if the soil is already moist.

The size of denitrification losses will vary from season to season, but it is generally thought to be one of the major nitrogen loss pathway in cane.

The problem with trying to estimate or quantify total denitrification losses is that there is no recognised scientific method of measuring di-nitrogen losses. This is a significant issue as di-nitrogen is the denitrification gas produced in the greatest quantity.

Minimising denitrification losses is certainly a challenge, especially without the use of enhanced efficiency fertilisers (EEFs).

If you can manage to avoid having high nitrate levels when waterlogging events are likely, particularly while soils are warm, then you are probably doing the best you can to manage this risk.

Controlled release fertilisers (CRFs) i.e. polymer coated technology are available to protect nitrogen from losses. However, in reviewing local research there are cases where CRFs have had minimal effect on reducing denitrification and even situations where they have actually increased overall losses compared with urea.1

Another EEF, ENTEC® is available to limit denitrification losses by stabilising the applied nitrogen as ammonium for a longer period of time.

Soil types vary in their capacity to hold and store moisture. Sandy, lighter soil types are renowned for being ‘leaky’, while clay or loam based soils have a higher water holding capacity.

In taking action to prevent leaching, the same options are available to growers and advisers as with denitrification – limit the pool of nitrate nitrogen when leaching events are likely.

Because ammonium is positively charged, it sticks to the soil rather than moving with water flows.

ENTEC stabilises fertiliser nitrogen in the ammonium form, so that large pools of nitrate nitrogen are not sitting in the soil at risk of leaching.

Runoff losses happen when the rate of rainfall or irrigation exceeds the rate of soil water infiltration.

Nitrogen can flow with the water over the surface of the soil and off site.

If the fertiliser is on the soil surface, is it particularly vulnerable, but even subsurface applied nitrogen can be subject to runoff without adequate compacted soil cover. This is the same requirement for minimising volatilisation losses.

Additionally, when water comes out of the soil in the hill or bed and down the inter-rows, flowing off the block, it can take dissolved nitrate nitrogen too. These ‘lateral leaching’ losses can be an issue across many cane farming systems.

Stabilising the nitrogen fertiliser as ammonium will help limit these losses.

Putting it all together

Growers and advisers can start to improve nitrogen efficiency in cane by first understanding each of these nitrogen loss mechanisms and then developing fertiliser programs that work to prevent them.

Of the four major nitrogen loss pathways (leaching, denitrification, runoff and volatilisation), the first three may be reduced by using ENTEC, and both the third and fourth can be reduced with adequate compacted soil cover.

A suggested strategy to cover the four major nitrogen loss pathways is:

These strategies are what we have right now. Additionally, the research community is embracing a much wider scope in considering ways to improve nitrogen use efficiency in cane.

In a comprehensive report by Sugar Research Australia ‘A review of nitrogen use efficiency in sugar cane’ Prof Mike Bell and Dr Phil Moody suggest a range of future research priorities aimed at improving fertiliser use efficiency without compromising productivity.

The report’s conclusion suggested that improved fertiliser technology had the potential to be the ‘step change’ that could reduce fertiliser rates, reduce off-site impacts and maintain or improve cane growers’ productivity and profitability.

I believe ENTEC could be this game changer for our industry.

For more information on how ENTEC can help improve nitrogen use efficiency in cane, please contact me on 0428 111 471 or email rob.dwyer@incitecpivot.com.au.